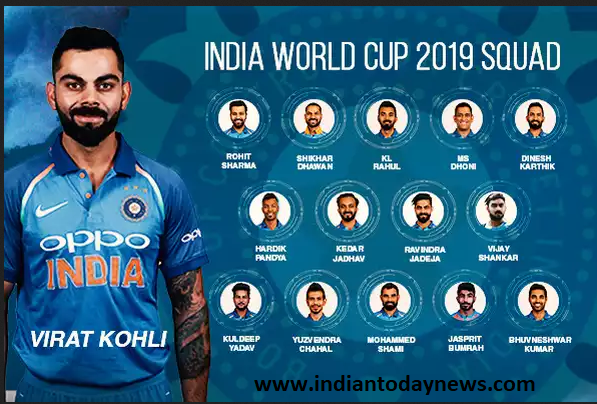 India have named Vijay Shankar, Dinesh Karthik and KL Rahul in the squad for the upcoming World Cup 2019 in England and Wales. Ambati Rayudu and Rishabh Pant were left out of the squad, which also has a place for Ravindra Jadeja.
Squad: Virat Kohli (c), Rohit Sharma, Shikhar Dhawan, Vijay Shankar, MS Dhoni, Kedar Jadhav, Hardik Pandya, Ravindra Jadeja, Mohammed Shami, Kuldeep Yadav, Jasprit Bumrah, Yuzvendra Chahal, Bhuvneshwar Kumar, KL Rahul, Dinesh Karthik
There had been a lot of talk regarding the potential number four for India, a pain point that the team has been trying to resolve for quite a while now. Vijay Shankar will now bat at two-drop, as revealed by chairman of selectors MSK Prasad. The reserve ‘keeper slot has gone to Karthik, while KL Rahul will be the back up opener.
MSK Prasad stated that Karthik was preferred over Pant due to his superior ‘keeping skills.
“Definitely a case where we debated (at) length. We all (agreed) that either Rishabh Pant or Dinesh Karthik will come in only when [Dhoni] is injured. In an important game, wicket keeping is also important. That’s the reason we went with Dinesh Karthik,” said Prasad.
Ravindra Jadeja took up the third spinner’s slot, alongside wrist spinners Yuzvendra Chahal and Kuldeep Yadav. The four pacers in the side picked themselves with Jasprit Bumrah leading an attack that also includes Mohammed Shami, Bhuvneshwar Kumar and all-rounder Hardik Pandya.
Speaking about Rayudu’s exclusion, Prasad said: “After the Champions Trophy (2017), we tried quite a few people in that position. We did give a few more chances to Rayudu. Vijay Shankar is three dimensional. We are looking at him at no. 4 to begin with. We also have Dinesh Karthik and Kedar Jadhav. It’s not that anything that went against [Rayudu], it’s that a few things went for [Shankar].”
“To begin with KL [Rahul] will be reserve opener, if need arises the team management will take a call,” he added.
Prasad also said that a few other bowlers will travel along with the team, as net bowlers, but added that they will be named later.
India begin their quest for a third World Cup title on June 5 against South Africa at Southampton. They’ll play two warm-up fixtures before that, against New Zealand at The Oval on May 25 and against Bangladesh at Cardiff on May 28.