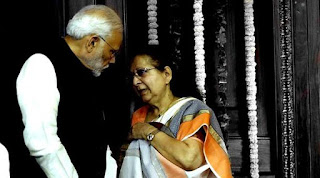 NaMo TV, which was briefly rechristened as Content TV last week, came up surreptitiously just weeks ahead of the general elections and is already available on all major national DTH operators.

The Election Commission (EC) is learned to have sought a response from the Information and Broadcasting (I&B) Ministry on complaints by Congress and the Aam Aadmi Party against Namo TV, a new channel dedicated to showing rallies and speeches of Prime Minister Narendra Modi.
According to sources, the Commission will take a call after examining the ministry’s response.

NaMo TV, which was briefly rechristened as Content TV last week, came up surreptitiously just weeks ahead of the general elections and is already available on all major national DTH operators, including Tata Sky, Dish TV, Airtel, Siti Network, among others.

Since the channel is not mentioned in the Union Ministry for Information and Broadcasting’s list of permitted private satellite channels in the country, Congress told the EC that either the channel “Content TV” is being broadcast as a “government-sponsored channel” or it has “not got any official clearance” from the I&B Ministry and “the contents are being broadcast in complete violation of the rules and regulations of cable televisions”.

The party has asked the EC to direct the I&B Ministry to suspend the channel.

AAP too wrote to the EC on Monday against the channel. It said that the BJP has “launched a 24-hours channel NaMo TV”. And though a party can have its own channel, it asked the EC if permission can be granted “even after the Model Code of Conduct is enforced”.
BJP has not officially claimed that Namo TV is owned by it

Though BJP has not officially claimed that the channel is owned by the party, Union minister Piyush Goyal had tweeted about the channel on Sunday with information about the channel number for it across different DTH networks. Tweeting about Modi’s “Main Bhi Chowkidar” event, Goyal wrote, “Watch it live on NaMo TV, along with lot more exciting content.”

Earlier on Sunday, BJP’s official handle had also tweeted about the channel, saying, “Capture the colors of elections… Watch the dance of democracy… Say NaMo again with NaMo TV. Tune in to get real-time coverage of PM Modi’s election campaign and a lot more fascinating content.”

Both, Goyal’s and BJP’s tweets also had a picture attached with the logo of the channel and details of the channel number across DTH platforms. The channel’s logo is the same photograph of Modi which is also used as the logo of Modi’s official personal mobile app owned by BJP. The NaMo app has an option called NaMo TV, on which the Prime Minister’s past and live speeches can be listened to.